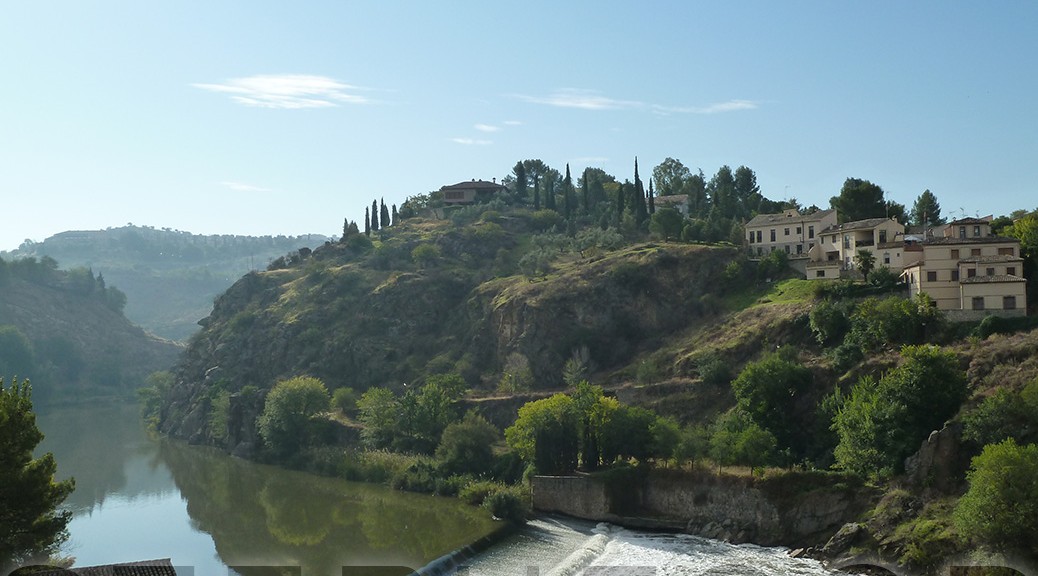 Toledo wasn’t at the top of my list of places to see in Spain. It didn’t boast the Alhambra, the Plaza de España or a large Roman aqueduct. Instead, it provided me with the feel of being in an old city, without the large crowds and fanfare.

Walking. This is what we did most in Toledo. We wandered along narrow slanted streets, spun around the Plaza de Zocodover, and walked a path far above the water.  There were signs of everyday life there. It didn’t feel like everything was geared toward tourists, although tourists do flock to this city. Like the tourists we are, we ate some famous marzipan and bought a tacky hat with bull horns. Sometimes you have to. There was no shortage of beautiful buildings, lived-in and full of character. Sometimes we would just get a glimpse of something magnificent ahead, and wonder how something so grand could fit in these narrow streets.

When we finally get there, I realize I can’t quite fit the whole building in the photo without losing the tour group. A “peek” is all I can capture.

I had a peek at something else… a history of various peoples living in Spain. While we tend to think of the Catholic history of Spain, there is a rich history of Jewish and Muslim people here as well. Identifiers for the Jewish part of town were embedded in the cobblestones, a quiet reminder that people lived together, but remained somewhat separate.

We also toured Santa Maria La Blanca, a building that was a synagogue from the  12th century (possibly the oldest synagogue in Europe that is still standing), and now serves as a museum.

As complex a topic as it is, I always love to see the mark that people have left on a place and its culture.

In other mildly religious tourism, we went into a back entrance at the Iglesia de Santo Tomé, to view an important painting.

If there is one artist associated with Toledo, it’s El Greco. While not born in Spain (hint: his nickname translates to “the Greek”), he lived and painted in Spain for many many years. This is his best known painting, The Burial of the Count of Orgaz.

The most stunning view As we got near the end of the walk, I turned to look at the waterway beside us. The scene took my breath away. We had the most stunning view of the Tagus river, with just enough mist rising off the water to make it look magical. As we crossed the Puente de San Martin to return to the bus, I had to turn around and take one last look. It was a lovely day in Toledo.