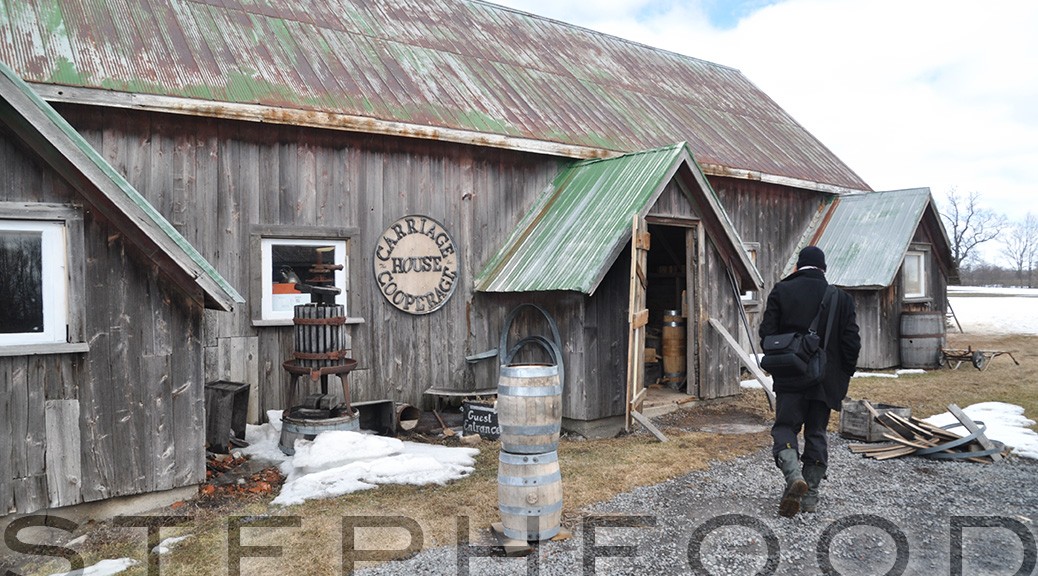 When we ventured out to Prince Edward County this Winter, we wanted to revisit some of the places we loved back in 2010. What really made the trip, however, were some of the new things that we discovered. 66 Gilead Distillery was one of them. The first new discovery we made was the Claramount Inn and Spa. A really great online deal lured us back to Picton in the Winter (after promising to return in the Summer! Eek!), and Claramount didn’t disappoint.

Our room had an old-school charm, and a fantastic soaker tub to top it off. We took full advantage of the outdoor hot tub, heated pool and sauna.

The #1 highlight of our trip, however, would have to be our visit to 66 Gilead Distillery, in Bloomfield. Too bad I didn’t manage to get a shot of the FRONT of the building!

66 Gilead is a second empire house, built in 1874. I’m a sucker for the re-purposing of historic buildings, so I was excited to see the inside. The tasting room was quiet at the time, so we tasted everything they had. I thought I would be coming away with a bottle of Canadian Pine Vodka and Loyalist Gin… but instead of the Gin, we came away with the Black Dragon.

66 Gilead’s Black Dragon Shochu is distilled from rice and barley, and aged in oak, giving it a golden colour. Its taste was unique, making it hard to leave without purchasing one.

We didn’t know we would be the first customers to try the Black Dragon, and buy one! Somehow, that resulted in me being put to work.

The Black Dragon Shochu bottles hadn’t been waxed or labelled yet, so when they asked if I wanted to do it myself, I jumped at the chance!

The Last Cooperage in Canada?

When we pulled into the parking lot at 66 Gilead, we were surprised to see the Carriage House Cooperage on-site (technically, at 46 Gilead). We were told that the cooper didn’t mind visitors, and so we headed over to take a peek.

We watched as a hole was drilled into a fresh barrel, and gave a puzzled look when Pete, the cooper, suggested we stick our noses in and take a smell. “It’s not everyday you get to do this”. So we did. It smelled incredible.

While in Ireland, we learned that fewer people are training as coopers, and more cooperages are closing. This is certainly the case in Canada, as The Carriage House is Canada’s only remaining cooperage. This is a recent development, as a cooperage in British Columbia closed earlier this year. Pete explained that importing barrels from France is much cheaper than Ontario oak barrels. We were happy to see Pete training a young apprentice. Can we hope that while the Carriage House is the only Canadian cooperage for now, it’s not actually the last?

Since meeting Pete, we’ve seen and heard countless references to him and his work. It seems that many businesses (wineries, distilleries and breweries) want Ontario oak barrels, and Pete is the guy to provide it. Think about that when you next enjoy an oaked beverage!

Pete doesn’t just create and repair barrels – he also ages wine vinegars in them! His small shop is in a section of a barn, and had such an eccentric character. Although the shop had literally just opened for the season, we were able to try a few vinegars  and purchased one to take home.

What was meant to be a quick stop to try a few distilled beverages ended up being quite the visit; we had no idea all of this was here! It was definitely worth a drive to Bloomfield.