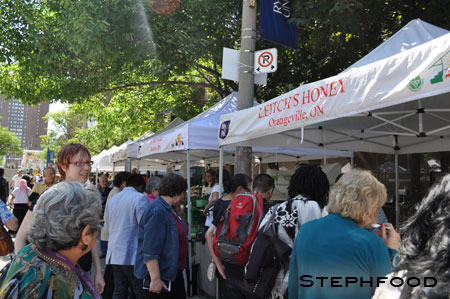 Today was the first day of the Ryerson Farmers’ Market, right out in the middle of the pedestrian zone on Gould St.

Ever since they first closed the street off to traffic, I have been hoping there would be a farmers’ market. Only a little bit hampered by the construction happening on Gould right now, the market got off to a great start with a handful of local farmers and producers. I can only imagine how great it will be once the construction is over, and the market is able to flower. So great!

END_OF_DOCUMENT_TOKEN_TO_BE_REPLACED 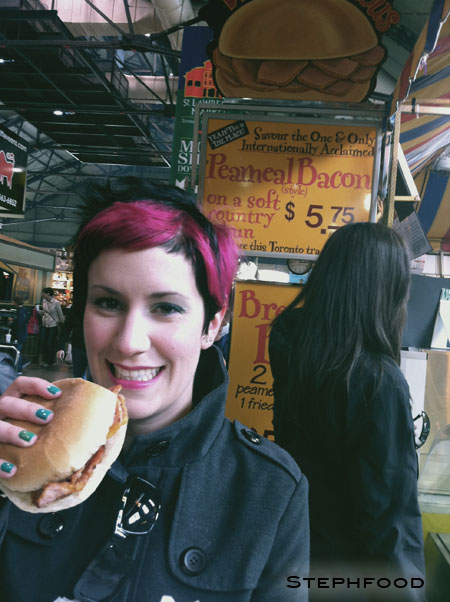 How hard is it to identify a city’s cuisine?

This is a story about how I found some Toronto food, and ate it.

END_OF_DOCUMENT_TOKEN_TO_BE_REPLACED 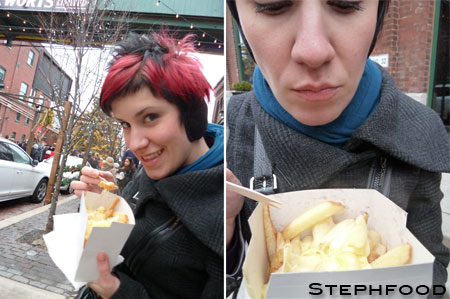 This past weekend, we checked out the Christmas Market at the Distillery District… twice!

I’ve been craving a German Weihnachtsmarkt since we were in Germany in 2006. For a brief time, I was incredibly jealous of Vancouver for getting one this year. A couple of days later, I found out about the one here in Toronto, in the Distillery District.

Initially, I was hung up on the things I remembered of the German markets – things that were missing from ours (like real Glühwein, served in keepsake mugs). Once I got over that, I was able to relax and enjoy the environment and the spirit. The thing about this kind of Christmas market is that it seems to be missing much of the tackiness of the season that we normally can’t seem to escape. Something about the little wooden huts, the smell of the food and the sound of caroling is kind of relaxing and enjoyable – even when you’re standing out in the cold.

We went on Friday night, and then again on Saturday afternoon.

There was fun to be had by all ages. Friday night, we definitely saw more adults milling about the beer garden, sampling some yummy Glenfiddich, Amarula and Weihenstephaner beer. Saturday afternoon was definitely for the kids, with some live reindeer, pretty ladies dressed as angels, and other family fun (in addition to the beer garden).

There was a variety of food available – mostly decadent treats, of course! The Sweet Escape even made a child-sized (real) gingerbread house. There was a sign to not touch, but I’m pretty sure there was a bite out of the side! I swear it wasn’t from me! The lineup for Soma was out the door and down the street (ridiculous!) on Saturday.

There were stollen, fruit cake, pfeffernüsse, marzipan pigs and all sorts of holiday baked goods. But that wasn’t what I was there for…

Yup, I went in search of sausages. Initially, I was hoping to find some Thuringer sausages like we had in Frankfurt. Instead, we found some tasty Oktoberfest sausages. They hit the spot. Too bad they ran out of Sauerkraut on the Saturday!

One of the stalls was serving freshly melted Raclette cheese on top of French fries. You could smell it before you could see it – the cheese had a wee bit of stink to it, in a good way. It was gooey and tasty, just as expected.

The guy making them had a pretty neat rig, too. There was a heating contraption that fit two blocks of cheese. They would melt the top layer of cheese, and he would scrape the melty goodness onto the fries. Pretty sweet! He was also serving up some choucroute (French for Sauerkraut, but no doubt prepared in its own way). I kinda wanted some cheese and coucroute on my fries, but I think that would have been an expensive box of fries!

In all, I think this was a valiant attempt at having a not-so-tacky Christmas event. If this can happen every year, I’m sure it can only get better.

Next week, a peek at the Ghosts of (my) Christmas Markets Past…

Until then, take a look at some other cities’ markets! It opened a while ago, and I’d walk by and wonder what it was. To be honest, I could not for the life of me read the name on the sign (it’s in a handwritten font, so pretty hard to read). I didn’t know what an Izakaya was, either, until some girl friends that had been to Japan explained it to me.

Izakaya is kind of like a Japanese pub, where you eat small plates (kind of like mezze or tapas) and drink.

This place is pretty popular, with a line out the door most nights. On the night that we went, the line wasn’t too bad so we decided to try it out.

They yell stuff at you when you walk in the door. I have no idea what they’re saying, but they say it with a smile so I think it’s something nice. There were many many fun sounding dishes, so we picked some, ordered beer and enjoyed ourselves. Our favourite ones are pictured above.

I finally had the opportunity to try Shochu (Japanese vodka). The one I chose was made from sweet potato, and had a really earthy flavour – not unlike a cross between vodka and scotch. My subsequent trial of Shochu was completely different, but that’s a different tale…

I don’t recommend getting the trio of coloured, flavoured sake shots. It was cute, but a little too gimmicky. I should have known better.

Overall, we really enjoyed ourselves. The energy in the room is incredible, and the food was really tasty. We tried to go back, but there was a 2-hour wait… hm, better luck next time! Enjoying my drink. Good to see they passed inspection.