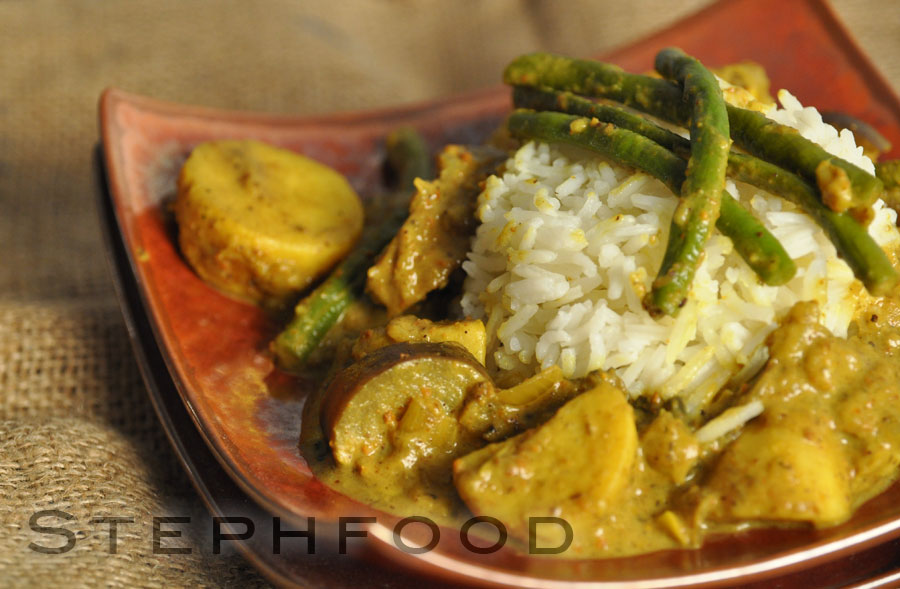 This Vietnamese curry brings me back many years. The mix of savoury spices and rich root vegetables was a surprise when I first tried it. It reminds me of my first years in Toronto, trying new cuisines and opening my eyes.

END_OF_DOCUMENT_TOKEN_TO_BE_REPLACED 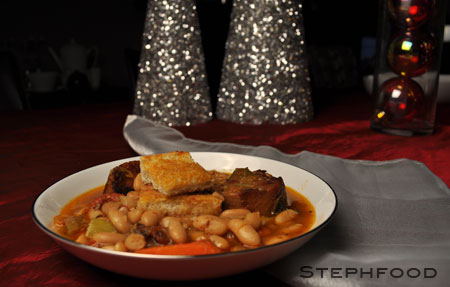 What the heck is a cassoulet? I had heard the word before, but wasn’t too sure what it was before it became the Daring Cooks’ challenge for January.

Cassoulet is a particular kind of white bean stew that originated in France. It’s become one of those dishes that ignite debates over who made it first, and what recipe is authentic. Sorry to offend, folks, but mine isn’t especially “authentic”, being vegetarian. There is usually a lot of meat involved.

One of the things that you see in many cassoulet recipes is duck confit. One of the requirements of the challenge was to make some kind of confit, and again there were some veggie options. I had to look up what a confit was, exactly, since I’ve always heard it associated with duck. Basically, ‘confit’ is used to describe a few things, in particular a method of preserving food by cooking it in a fat. In the case of meats, they are usually cooked in their own fats. For things like garlic, it is cooked in oil.

I made garlic confit.

So what exactly does one use garlic confit for? You can use it much the same way you might use a baked garlic – the cooking process mellows out the flavours, and gives it a creamy spreadable texture. This makes it (and the oil it’s cooked and stored in) easy to use in dips, soups, sauces… just about anything. Being a big lover of garlic, I thought this would be a fun thing to try making.

That done, I had to decide how to retain the spirit of a cassoulet without the meat. I opted to make the seitan sausages from last month’s challenge, and use them in the stew. I also added some smoked paprika to add some depth to the flavour.

I’m pretty sure it didn’t taste like a real cassoulet, but it was really good!

Our January 2011 Challenge comes from Jenni of The Gingered Whisk and Lisa from Parsley, Sage, Desserts and Line Drives. They have challenged the Daring Cooks to learn how to make a confit and use it within the traditional French dish of Cassoulet. They have chosen a traditional recipe from Anthony Bourdain and Michael Ruhlman.

Recipes after the jump!
END_OF_DOCUMENT_TOKEN_TO_BE_REPLACED Since I haven’t issued myself a month-long challenge for May, I’m taking on a couple of one-off challenges. This challenge was issued by Nupur, who writes for One Hot Stove. The goal is to find a recipe posted on another blog, and change something major about it and repost, with a link to the original blog post.

This probably isn’t a surprise, but I chose to veggify a meat dish. This dish could also be made gluten-free by using a non-wheat flour to thicken at the end (er, and by not using seitan, which is basically all wheat gluten).

I chose to make a South African Tomao Bredie (stew), which was originally posted by Asha, who writes for Fork Spoon Knife.

The reason I chose this particular recipe is because it is a South African dish that makes use of many spices that I’ve been ignoring lately. This is a very aromatic dish, featuring LOTS of ginger, allspice, cloves, cardamom and peppercorns. YUM! I’ve never tried cooking any South African dishes before, so I thought this would be a great place to start.

Also, the poster wrote about the No. 1 Ladies Detective Agency books when describing why SHE chose the recipe… while I haven’t read the books, I really enjoyed the TV series on HBO (Miss 97%!). So… yes, I choose recipes for a combination of reasons, some that make sense and some that do not.

I suppose I need to adapt the inspiration for this dish as well, instead of just stealing the No. 1 Ladies Detective Agency reference… If I try really hard, I can just imagine Wikus Van De Merwe eating this (before his run-in with the aliens) in Joburg. This was a great dish to have on a cool fall day. Yes, I know it is the middle of May — it FEELS LIKE FALL this week! I’m trying really hard not to be angry at the weather man, filtering some of the anger into cooking. Enjoy!

The original recipe can be found at Fork Spoon Knife. The 2010 April Daring Cooks challenge was hosted by Wolf of Wolf’s Den. She chose to challenge Daring Cooks to make Brunswick Stew. Wolf chose recipes for her challenge from The Lee Bros. Southern Cookbook by Matt Lee and Ted Lee, and from the Callaway, Virginia Ruritan Club.

I opted to make a variation on the first recipe given. I usually don’t eat meat, so this dish posed quite a challenge for me. I think there were three or four different kinds of meat in the recipe… I replaced all of the meat with shrimps and seitan, the broth with a vegetable/shrimp broth. Since this likely changed the flavour quite a bit, I’ve jokingly labelled my variation of the recipe (New) Brunswick Stew. Any Canadians reading this will get the New Brunswick/seafood reference… right? (I’m sure there is nothing specifically New Brunswick about it. I just wanted a cute title).

I started by making a broth, which I based on one I got from a Seafood Gumbo recipe I plan to try eventually. I also had to make some seitan, a vegetarian meat substitute made with wheat gluten (sorry, GF folks!). Both of these things added to the cooking time, since I had to make them from scratch.

Next, I fried up some chile peppers. I got some fun dried chiles called Chilhuacle Negro that have a medium heat (5/10). I’m pretty new to chiles, so I didn’t want to get any that were too hot. That said, I should have kept some of the seeds in for a little more heat. This was where the excitement starts – the smell of the peppers and the oil in the pan are heavenly! Here is what the stew looked like in the early stages – the seitan is still in large chunks (to be sliced into thin strips in a later stage). While the broth started off looking quite red (from the chile peppers and the smoked paprika), it mellowed into a nice warm golden colour by the end. Here is the final product, and the shot that everyone on Daring Cooks seems to be doing – the standing spoon shot. This came from the original recipe. To describe the texture of the finished stew, they said that Brunswick stew is not done properly “until the paddle stands up in the middle.”. Everyone has been doing their version of this shot, so I felt obliged to do the same. It was a hearty hearty stew, but the broth was not too thick and gloopy. In the end, the stew turned out great! It was a bit of a challenge deciding what to use instead of meat, but I think the seitan worked wonderfully! This is definitely something I wouldn’t have known to seek out, and there’s no doubt I’ll be making this again.

Recipe after the jump.