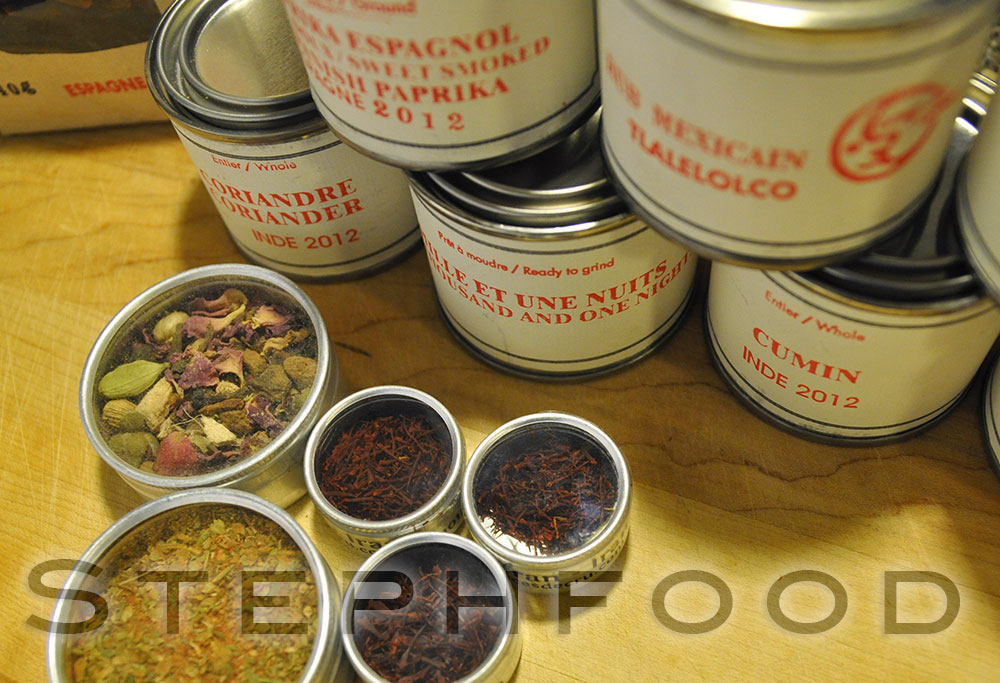 Ahhh spices. I haven’t posted about you lately… are you feeling ignored?

I’ve actually been working with my spices quite a bit in the last few weeks; organizing, editing and replenishing.

I often write about how much I love spices. I think spices are the top thing that inspire me to cook. As much as I love the clean taste of fresh, unencumbered produce, I love playing with spices more. It’s as much about the process, about the form, as it is about the final dish. I feel a bit like a mad scientist when I put together a blend of spices; a little like an apothecary when I grind them with my mortar and pestle and put the finished mixture into teeny tiny glass bottles.

… and then there’s the smell. Lovely!

My Noodly Appendages Reach Around the World

Of course, part of the organizing, editing and replenishing process was to place an order with Épices de Cru. I was in desperate need of some (reliable) saffron, and thought I’d put together a decent order and avoid shipping charges. In the process, I was reminded of just how tied to the rest of the world we are.

I wanted to buy more Kurdish Isot pepper, from Turkey, which I was told should be back in stock soon. I held off on my order, so that I could add it. A few weeks later, I contacted them again on Facebook; only to find out that their shipment was delayed due to the troubles around the Turkish/Syrian border. Wow. Of course, I was not put off by the delay – that would be silly. Instead, I was floored by the simple realization that since so many of the things I enjoy most come from various parts of the world, the stability of the world affects how I eat. I can’t quite articulate how it made me feel, aside from saying that I have a renewed appreciation for where my food comes from and a renewed understanding that I am, indeed, spoiled by the ability to access these things at all.

In the end, I placed my order sans Isot, and was not disappointed, as you can probably tell by my photos. I broke one of my rules here – I still buy spice blends from them; sometimes for inspiration and sometimes because a mix contains some ingredients I don’t need in my pantry on their own. Curing My Kitchen of What, Loneliness?

On the day that these lovelies were delivered, I had already tasked myself with a bit of a challenge. I am trying to go through thekitchn.com‘s Kitchen Cure assignments, and clean up my darn kitchen! Unfortunately, I have lagged WAAAAAAAAY behind in all but one task. You see, I did Assignment #7: Special Project without knowing it was going to be assigned (does it still count? I say yes!). It started with Assignment #2, where I cleared out, cleaned and reorganized a couple of my pantry cupboards. Having just picked up my new spices from the post office, I had spices on the brain, and I decided to take it one step further and reorg my “backup” spices. These are the spices that I don’t keep in my main spice drawer, that float around every surface of my kitchen, that J regularly complains about. I cleared out a shelf of not-so-useful items, and I put ALL of the backup spices there, all pretty and organized. Woof!

So now I have THREE dedicated spaces for my spices. Which is the third, you ask? (You didn’t ask? I’m telling you anyway!) I prominently display my Épices de Cru  tins up the wall at the end of my bar. With everything else so neatly put away, I needed SOMETHING spicy to be visible!

Now to decide what wonderful things to make with my new spices.

(P.S. Spicy Spice is my new Spice Girl name. I’m shocked that there isn’t one already!)