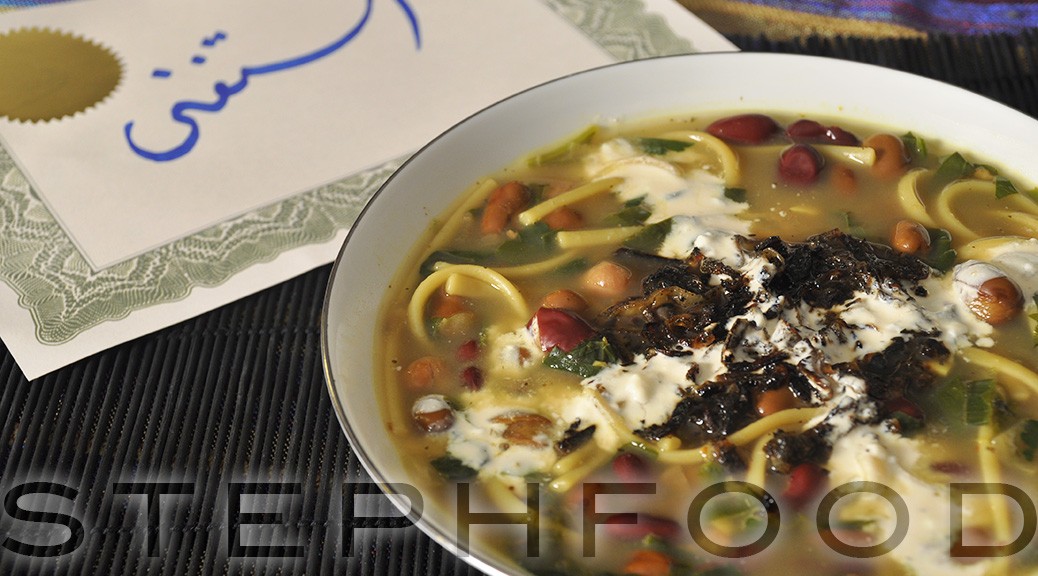 I think this is my favourite new dish for Winter, though I had never even heard of it before January. I’m pretty eager to try “new” Persian dishes. It started at work, when I caught a peek of my colleague’s lunch. She’s Persian, and I often ask her twenty questions about things she’s been cooking. It was “ash”, a thick soup made up mostly of legumes, greens and herbs. I looked up recipes right away.

Lucky for me one of my current favourite cookbooks, Louisa Shafia’s “New Persian Kitchen” had a good recipe in it. (No joke, this book is FULL of good recipes. There hasn’t been a dud yet). This is the recipe I followed the first time I made the dish. After talking to my colleague, I decided to make some modifications to the recipe. Her family often puts more fresh herbs and green onion in the dish, and I was really keen on using kashk instead of the suggested yogurt. Kashk is a sort of preserved yogurt that adds a bit of creaminess and a unique flavour to the dish. It is quite strong tasting, and isn’t for everyone, so I understand why plain yogurt was substituted (I have both listed in the recipe below).

Reshteh is a type of Persian noodle. If you can’t find reshteh, you can use linguine instead. I haven’t yet tried real reshteh, but the linguine was a great substitute.

One last note: This soup is even better the next day! You’ll probably see the same sentiment expressed on every Ash recipe you see, but it’s true!