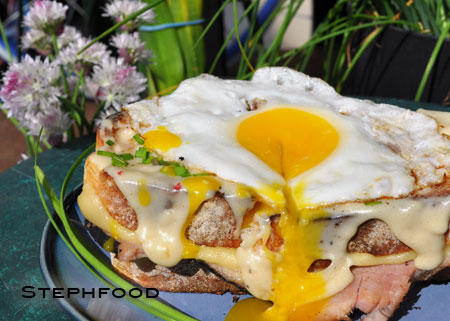 I am a sucker for a good brunch. Lately, I’ve been all about the Benedict, and Benedict-adjacent. Recently, I branched out and tried a Croque Madame, and just had to try making it for myself.

This time around, I’m just trying to make the base recipe. Next time, I’ll mess with it a bit and make it my own…

If you’ve never had Croque Monsieur or Croque Madame, they’re both basically grilled ham and cheese sandwiches. Sometimes they have a bit of Mornay sauce poured over. Croque Madame has a fried egg on top. That’s pretty much it.

I had to look up what a ‘Mornay’ sauce was – and then I laughed, because it’s the process I’ve always used to make my ‘cheese sauce’. Heh. Now I can be all fancy and tell people it’s a Mornay sauce. First you make a ‘roux’ (butter and flour cooked together), thin it with milk to make a ‘Bechamel’, then add cheese to make it a ‘Mornay’. There ya go – each step has a name.

I always learn something new – in this case, I learned the name of the thing I already do.

Back to the Croque Madame… This is no ordinary ham and cheese sandwich. It’s major. It’s a meal in one sandwich. Honestly, it’s not too hard to make, and you can prep some of the ingredients the night before so you don’t have to do it all in the morning. In fact, the Mornay is easier to spread on the bread right out of the fridge. Since I often use Mornay sauce on pasta, I can see using the leftovers on brunch the next day!

Another thing I should mention – some recipes I found call for broiling in the oven. To me, this seems like extra work – and not appealing on a summer morning. I opted for a recipe that relies entirely on a frying pan (and a small sauce pot for the Mornay). That said, if you are making more than a couple of sandwiches and have to do them in batches, broiling them in the oven for a few minutes (sans egg) is a great way to finish them all at the same time. I only had to make two, so heating up the oven just wasn’t worth it for me.

The Verdict: This is a really filling breakfast/brunch dish that looks and tastes impressive. There is some prep work involved, but some of it can be done in advance. I will definitely be making this again.

based on this recipe from seriouseats.com.

based on this recipe