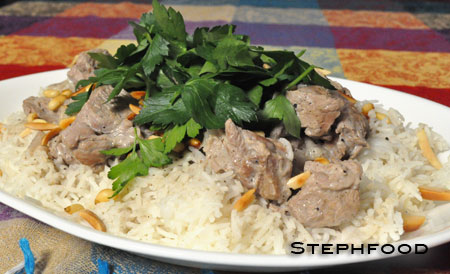 Mansaf is considered the national dish of Jordan, where they use it to show respect and hospitality to guests. On the surface, it looks like plain meat and rice, unnaturally dressed up with too much parsley – but if you could smell it, your opinion would quickly change.

I was first inspired to make this dish by a friend on Facebook – someone I had gone to school with for many years, but had lost touch with. She posted a comment about her love for Mansaf, and I just couldn’t help but ask her for a recipe.

It took me a while to actually make the dish…

The main challenge is finding an ingredient called ‘jameed‘, a dried and hardened yogurt. I didn’t find it in its usual form – I could only find it in a ‘ready to use’ format. Good enough. I had never had the real thing before, so I don’t really know whether it tasted different. If anyone knows where you can get Jordanian food in Toronto, I would love to try Mansaf made by people who know how it should taste!!

Let me tell you about the jameed. I knew it would be an interesting flavour, being dried yogurt, but I wasn’t quite prepared. It has a very rich smell and flavour, almost like a blue cheese (for lack of a better comparison). I wasn’t worried that it was off – I had read enough to know that jameed – and Mansaf – have a bit of a stink to them. To get a real sense of what I mean, please read this blog post by Toronto hip hop artist, Arabesque. His childhood embarrassment at the hands of Mansaf says it all.

I was a little worried that J wouldn’t like it.

I really shouldn’t have worried. The jameed mellowed out with cooking, and meshed well with the lamb flavour. Amazing!

Of course, I had to add some spices to it. Not all Mansaf recipes I found called for spices, and some called for more than others. I decided to use spices that I found repeatedly in recipes, and made an Arabic Levant baharat (spice blend) to use. You know, any excuse to use a new spice blend and play with my spices.

This is a really hard dish to describe. The sauce has a very bold flavour, but mellowed out after stewing the lamb. On top, you sprinkle fried/toasted pine nuts and almonds, which give a crunch and nuttiness (duh!). Add to that a pile of fresh parsley, adding a little bite and some brightness. Together, it is an amazing blend of flavours and textures. Serve this dish family style on top of a nice Arabic flatbread, if you can get it. I couldn’t find any. Also, the more traditional recipes call for much larger pieces of lamb, with the bone in, and often the lamb head. I chose to use cubed lamb instead, because that’s what I like.

I want to officially put Jordan on my list of places I need to go. I want to go to Petra. I want to eat all of their Mansaf, and bring home some real jameed.

When looking for Mansaf recipes, I came across this video of Chef Abroad in Jordan. Not only does it show Mansaf, but also Petra. One day…

This dish was incredible, and very different from other things I make. It was very easy to make, and the jameed was the only required ingredient that was tricky to find. I would have liked to find the right Arabic flatbread to serve with it… I had quite a bit of the “broth” left afterward, so I ate it on noodles, with a bit of plain yogurt added. So delicious!

modified from this recipe.