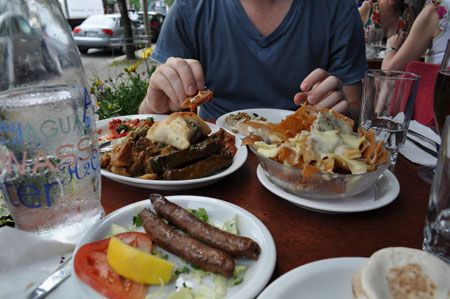 On our final day in Montréal we went back to Marché Jean-Talon. I talked it up pretty good, and Joe wanted to see for himself. Of course, I took him to Olives et Épices and showed him the spices. I behaved myself, and only bought two more items.

For lunch, we headed to Le Petit Alep. It was on my list of places to have lunch, but I just wasn’t hungry enough to go before. This worked out perfectly, because the place is adorable and a perfect place to bring J.

Le Petit Alep specializes in Syrian, Aleppo and Armenian Cuisines and is the baby sister restaurant to Alep, which is right next door. Interestingly, Petit Alep appears as the second top rated Middle Eastern restaurant in Montréal (according to Urban Spoon), while Alep didn’t make the top ten. I doubt it has anything to do with the food, but likely the price. Alep offers fine dining, which no doubt accounts for the higher cost. On the other hand, Le Petit Alep offers incredible food, at a great price, with a really nice comfortable atmosphere. It’s a great restaurant experience in it’s own right.

I may have mentioned before that I can be frustratingly indecisive. I wanted to order one of everything. We settled on a vegetarian appetizer platter, some fried pitas with za’atar and cheese, and Armenian sausage. The waiter says to us ‘so, you’re really hungry?’. I guess we ordered a lot.

The appetizer platter was partly made up of things I knew, like Hommos (chickpea dip) and Metabal (Syrian babaghanoush, puréed roasted eggplant) and Yalandji (stuffed grape leaves) – all of which were amazing. The highlight for me, though was the Mouhamara, a dip made from breadcrumbs, pomegranate molasses and nuts. It was tangy and nutty and unexpected. I need to learn how to make this. What a great way to use up breadcrumbs!

The fried pita dish was described by the waiter as being ‘Syrian nachos’, with fried pita crisps topped with seasonings and melted cheese. How can you say no to that? It was super fun.

The Armenian sausage was a little inelegant looking thing, but well spiced and delicious. We were told to dip these in the sauces, which made it even more fun!

To end the meal, we had Turkish coffees scented with cardamom (they were probably Syrian coffees, but I asked ‘do you guys do Turkish coffee?’, and wasn’t corrected). It was the perfect way to end the meal, and send us on our way to Québec city. Au revoir, Montréal! Au prochaine! 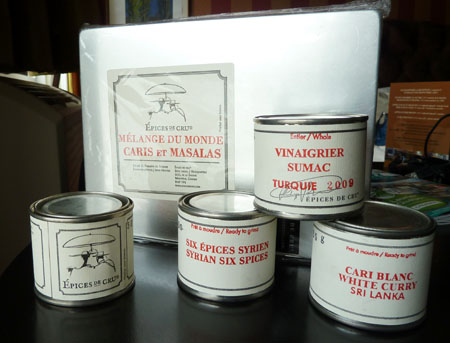 There was only one thing I absolutely HAD to do on my trip to Montréal. I had to go to Marché Jean-Talon and find me some Épices de Cru.

END_OF_DOCUMENT_TOKEN_TO_BE_REPLACED 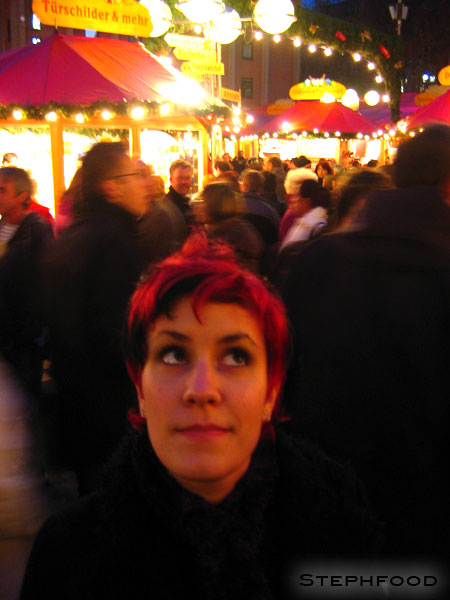 My obsession with the German Weihnachtsmarkt (Christmas Market) began in late Fall 2006, on my first trip to Europe.

Being in Germany was a big deal for me – having been told my whole life that, being of German heritage, I had to go to Germany when I was older. Some of my early memories are of exploring the Christmas bazaar at the German hall. There were always handmade crafts, lots of food, singing and dancing. I didn’t know that it was the quiet offspring of a greater and older cultural event that happens every year in cities, towns and villages all over Germany.

I think I first understood the spirit of the German Weihnachtsmarkt in Dortmund. We were brought there by friends, who let it be known that you could not experience the market without having some Glühwein. The hot, mulled wine is served in keepsake mugs at the various markets. It keeps you warm, gives a wee buzz and leaves you with a memento of your time there. This would not be our only taste of Glühwein – I made a point of having some at both of the other markets we visited.

We spent most of our time at the market in Frankfurt am Main, once when it was first opening up and then again three weeks later, when it was in full swing. It’s a winding road of sights, sounds and smells, culminating in the square at Römerberg. This was the highlight for me – the Römer buildings look like something out of a fairytale, like they’re made of gingerbread or something.

Being a food girl, of course we had to try a bit of everything! We enjoyed some chocolate covered (real) marshmallows, giant cookies claiming “Ich Liebe Dich!” (aww, cookie, I love you too!), skewers of chocolate-covered fruit, sauerkraut and brats, and more!

One of the best things I ate had to be the Thüringer sausage, served from the weird swingy fire contraption from the photo above. Topped off with some fantastic strong mustard, it was heaven in a bun. Mind you, eating meat was a very strange thing for me in 2006, so indulging in a sausage was a bit novel.

Later in the trip, we had a free day in Köln, and headed right for Kölner Dom. Of course, there was a Weihnachtsmarkt right out front! First, we explored the cathedral, climbing higher and higher. The photo above, on the right, is the view of the market from one of the windows in the cathedral. Amazing views.

Köln had a number of markets, and you could get to them all on the train. The biggest was definitely Weihnachtsmarkt am Kölner Dom, but there was also a neat Medieval market near the chocolate museum, and a few others. This was a great way to take a load off and see the markets and parts of Köln. Of course, I bought a pile of chocolate at the museum shop. It couldn’t be avoided.

Once it gets dark outside, the market becomes more magical. If anything, it’s busier, and the dark is broken by the lights coming from the various stalls, and Christmas decorations. A nice mug of Glühwein keeps you warm as you worm your way through the crowds, picking up some roasted almonds, baked goods, teas and crafts.